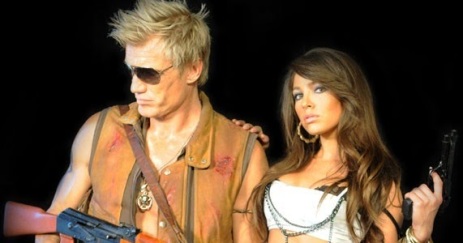 On this special episode, I had the pleasure of speaking with screenwriter Steve Latshaw.  Latshaw co-write the rock ‘n roll action classic Command Performance alongside Dolph Lundgren, which Lundgren also directed and starred in!  In Command Performance Lundgren plays a rock and roll drummer who becomes a one-man army when terrorists take over a rock concert in Moscow!  With well over 30 writing credits to his name and experience working alongside some of the biggest action stars, Latshaw sure had plenty to say regarding the ever-changing landscape of action cinema.  In addition to taking me through the script-writing process, Latshaw also helped answer these burning questions: How the genre has evolved over the years? How has Lundgren managed to stay relevant? How did Lundgren and Latshaw work to make sure that Command Performance pumped originality into the traditional Die Hard-trope?  How does Lundgren’s generosity extend beyond the film sets?  And what projects does Latshaw have lined up for the next year?  Join us as we answer these questions and many more!

Major thanks to Steve Latshaw for his time.  Please feel free to rate and review the show on iTunes, Stitcher, or wherever else you go to subscribe!